Are you trying to lose weight using the Cinnamon and Honey cleanse diet? If yes, I will help you with some of the key facts and methods of doing it.

Home remedies are becoming very popular to lose weight. The Cinnamon and Honey cleanse diet is one such home remedy.

Natural remedies for weight loss are the best as they have minimum side effects and maximum benefits. Honey and Cinnamon both have some crucial health benefits, especially for weight loss.

When these two are combined, they show a synergistic effect. So, first, I will tell you the individual benefits of Honey and Cinnamon in weight loss. Then, we will proceed to their combined effect.

Benefits of Honey in Weight Loss

Benefits of Cinnamon in Weight Loss

So, when Cinnamon and Honey are consumed together as a cleanse diet, they prove very effective in weight loss. It helps in reducing the food cravings, cuts down the body fat, increases metabolism, and talks about a few.

This diet provides energy to the body to make it active. When your body is active, you can perform the physical exercises efficiently.

What is a Cinnamon and Honey Cleanse Diet?

When you add Honey to hot water, it is not effective. Some important enzymes in Honey get destroyed by the heat of the water. So, you should add honey only in normal water.

The ratio of Cinnamon and Honey is 1:2. It means, if you are taking half a teaspoon of Cinnamon, take 1 teaspoon Honey.

My recommended Cinnamon powder products from Amazon are:

Use natural or raw honey for the best results. Natural honey is the unprocessed form of honey with maximum weight loss benefits. And here are my recommendations for raw honey:

The Recipe: How to Prepare Cinnamon and Honey for Cleansing?

To prepare the cleanse diet, you will need Cinnamon powder and raw Honey.

Use Cinnamon sticks if you don’t have ground Cinnamon; however, it is advisable to prepare with Cinnamon powder always.

If you want to make this cleanser in larger quantities, you can add more ingredients in the same proportion and refrigerate it. 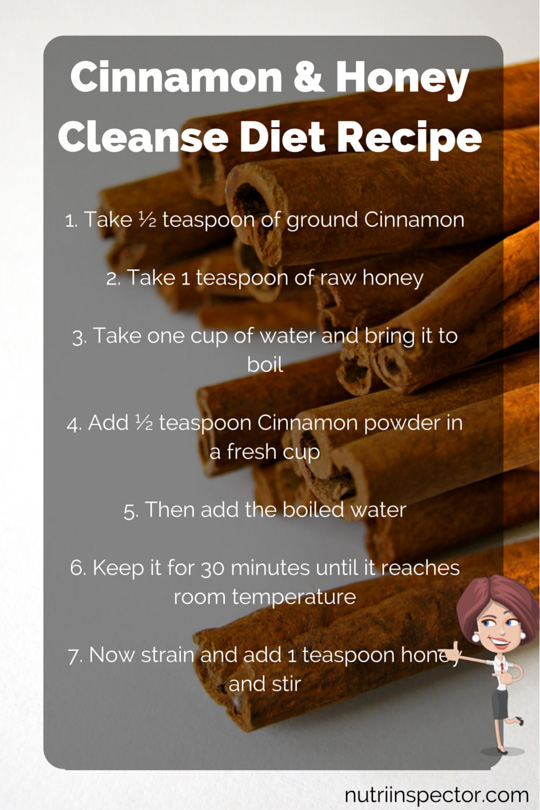 How to Use this Diet for Weight Loss?

You need to be aware of how and when to follow this diet. I will divide it into four parts.

Consume the mixture with an empty stomach for great results. Make it a daily routine to have the mixture before eating anything else.

Ensure you do not eat at least for an hour after having it, as it makes your digestive system clean and metabolism high.

Drinking the Cinnamon and Honey cleanser between your meals can help you curb extra snacking post meals and food cravings. This healthy mixture also keeps you alert and active throughout the day. Have it if you suffer from post–meal crashes or dizziness.

Do you work out to lose weight? Cinnamon and Honey are beneficial to provide your body with extra energy.

You can maximize the effect by drinking this mixture before you head for an exercise. Ensure you don’t have anything until 30 minutes after finishing your workout; this will help your body burn more calories.

It is essential to have a gap between sleep and food at night. I know many of you find it difficult to control your midnight cravings for snacks. To control this, you can try Cinnamon and Honey.

It will lower the urge to eat extra food after your meals at night. This mixture also helps you to enjoy a peaceful and sound sleep.

Is this Diet Effective?

It is effective if you have it regularly. At the same time, you should also not over-expect. The diet is effective but, it is not a magical wand regarding weight loss. It will take time and only shed a marginal percent of your body fat.

You need to make extra efforts to follow this diet. You should maintain a healthy lifestyle, eat healthy, sleep well and take necessary precautions to stop weight gain. This diet alone will not help you noticeably.

Are There Any Side Effects of Cinnamon and Honey Cleanse Diet?

Usually, Honey has no side effects. It depends on your body and reactions towards a particular thing. Some people might be allergic to Cinnamon.

Make sure you buy Ceylon Cinnamon powder. It is mild and usually less reactive. Apart from this, if you are trying Cinnamon for the first time, consult your physician.

Try to have a minimal quantity of this first. If you suffer from any reaction such as nausea, dizziness, or upset stomach, stop taking it.

Especially for kids and pregnant women, Cinnamon should be used under medical guidance. Pregnant women often keep away from Cinnamon.

With this, I conclude. Cinnamon and Honey cleanse diet helps in weight loss, but not very much. You should have it daily before sleeping and after waking up to get the best results.

If you think this article is interesting, please share it with your friends as well.

Also, I will love to receive your thoughts or queries on this one. Please share it in the comments below.